Privacy-preserving machine learning offers many benefits and interesting applications: being able to train and predict on data while it remains in encrypted form unlocks the utility of data that were previously inaccessible due to privacy concerns. But to make this happen several technical fields must come together, including cryptography, machine learning, distributed systems, and high-performance computing.

The TF Encrypted open source project aims at bringing researchers and practitioners together in a familiar framework in order to accelerate exploration and adaptation. By building directly on TensorFlow it provides a high performance framework with an easy-to-use interface that abstracts away most of the underlying complexity, allowing users with only a basic familiarity with machine learning and TensorFlow to apply state-of-the-art cryptographic techniques without first becoming cross-disciplinary experts.

In this blog post we apply the library to a traditional machine learning example, providing a good starting point for anyone wishing to get into this rapidly growing field.

This is a cross-posting of work done at Dropout Labs with Jason Mancuso.

We start by looking at how our task can be solved in standard TensorFlow and then go through the changes needed to make the predictions private via TF Encrypted. Since the interface of the latter is meant to simulate the simple and concise expression of common machine learning operations that TensorFlow is well-known for, this requires only a small change that highlights what one must inherently think about when moving to the private setting.

Concretely, we consider the classic MNIST digit classification task. To keep things simple we use a small neural network and train it in the traditional way in TensorFlow using an unencrypted training set. However, for making predictions with the trained model we turn to TF Encrypted, and show how two servers can perform predictions for a client without learning anything about its input. While this is a basic yet somewhat standard benchmark in the literature, the techniques used carry over to many different use cases, including medical image analysis.

Note that the concrete implementation of provide_weights and provide_input have been left out for the sake of readability. These two methods simply load their respective values from NumPy arrays stored on disk, and return them as tensor objects.

We next turn to making the predictions private, where for the notion of privacy and encryption to even make sense we first need to recast our setting to consider more than the single party implicit in the script above. As seen below, expressing our intentions about who should get to see which values is the biggest difference between the two scripts.

We can naturally identify two of the parties: the prediction client who knows its own input and a model owner who knows the weights. Moreover, for the secure computation protocol chosen here we also need two servers that will be doing the actual computation on encrypted values; this is often desirable in applications where the clients may be mobile devices that have significant restraints on computational power and networking bandwidth.

Note that most of the code remains essentially identical to the traditional TensorFlow code, using tfe instead of tf:

These properties also make it easy to benchmark a diverse set of combinations of machine learning models and secure computation protocols. This allows for more fair comparisons, more confident experimental results, and a more rigorous empirical science, all while lowering the barrier to entry to private machine learning.

Finally, by operating directly in TensorFlow we also benefit from its ecosystem and can take advantage of existing tools such as TensorBoard. For instance, one can profile which operations are most expensive and where additional optimizations should be applied, and one can inspect where values reside and ensure correctness and security during implementation of the cryptographic protocols as shown below. 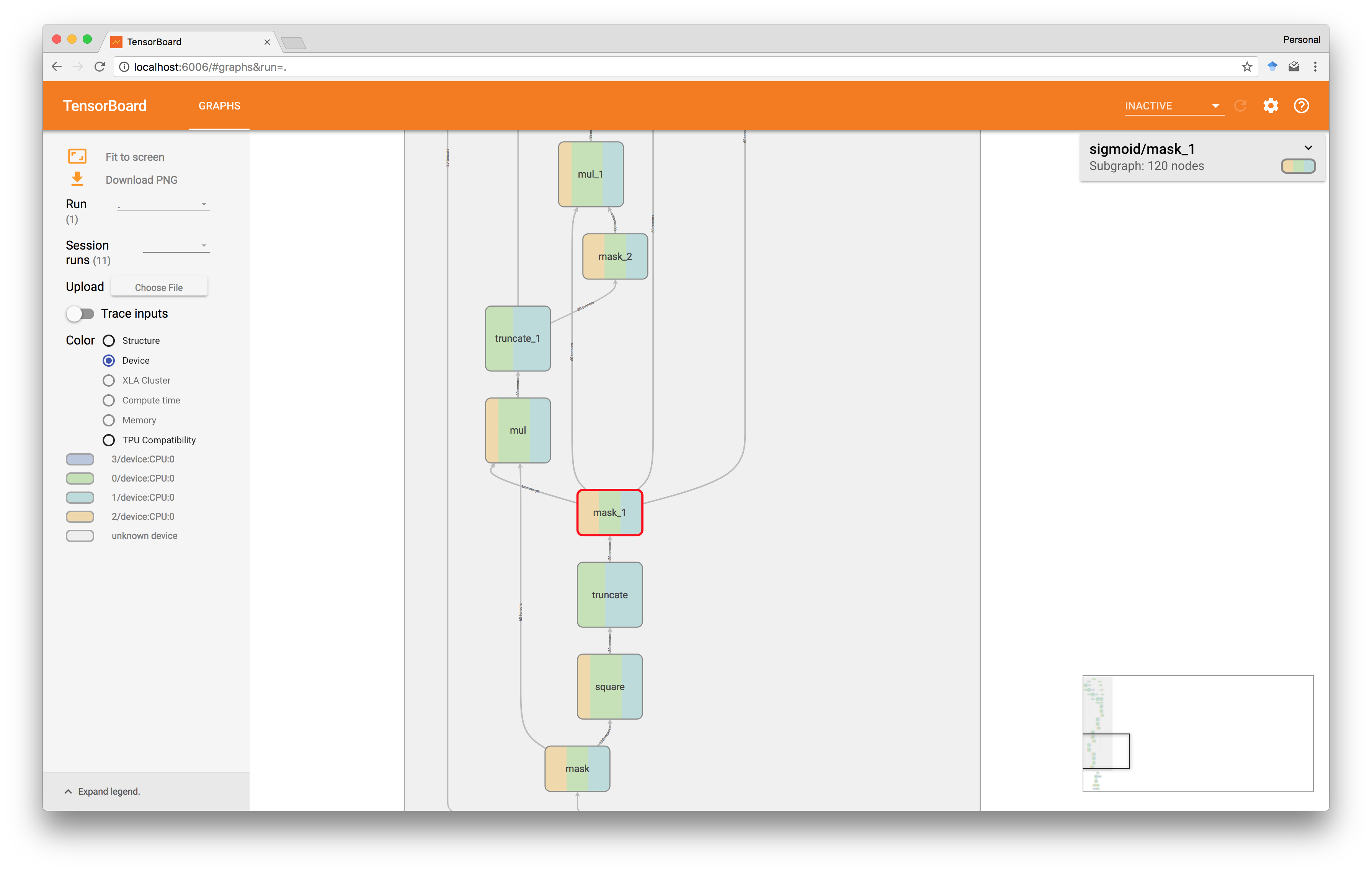 Here, we visualize the various operations that make up a secure operation on two private values. Each of the nodes in the underlying computation graph are shaded according to which machine aided that node’s execution, and it comes with handy information about data flow and execution time. This gives the user a completely transparent yet effective way of auditing secure computations, while simultaneously allowing for program debugging.

TF Encrypted is about providing researchers and practitioners with the open-source tools they need to quickly experiment with secure protocols and primitives for private machine learning.

The hope is that this will aid and inspire the next generation of researchers to implement their own novel protocols and techniques for secure computation in a fraction of the time, so that machine learning engineers can start to apply these techniques for their own use cases in a framework they’re already intimately familiar with.

To find out more have a look at the recent preprint or dive into the examples on GitHub!